OBSERVATIONS IN A WHALE SANCTUARY

Sanctuary at Saturna: An Interview with Marine Researcher Lucy Quayle

The sandstone cliffs of East Point on Saturna Island are one of the most photographed places in the Southern Gulf Islands. Here, on a windy Saturday at the end of June, marine researcher Lucy Quayle looks through her camera, not at the famed Fog Alarm Building and red steel Light Station, but at the water, where a humpback whale named Heather has just surfaced with her calf.

“They spend quite a lot of time out in the waters there,” she says of the humpbacks, whom she’s observed nearly every day since her arrival in early June.

Originally from Tasmania, Australia, Quayle has lived in British Columbia for the past six years. Growing up by the ocean, she developed a passion for research and marine life, and a growing concern about the destructive impacts of climate change.

“I love the ocean. Can’t stay away from it,” she says. And indeed, she has spent nearly every day collecting data from her vantage point, with the help of her partner and volunteer Derek Peterson.

Gathering data for a Master’s in Ecological Restoration, Quayle spends her time at East Point observing and identifying whales and vessels that pass through the water. Her cliffside lookout is the ideal place to spot whales from land. It is situated directly on the Interim Sanctuary Zone (one of three in BC) which lies along Boundary Pass—a major transit corridor for both whales and vessels in the Salish Sea.

Quayle’s thesis draws on underwater acoustic analysis and visual surveys to examine the ways in which cetaceans use the waters of Boundary Pass and the effectiveness of the Interim Sanctuary Zones in limiting vessel traffic and marine noise within this critical marine habitat.

Although the Southern Resident Killer Whales were just heard the night before in Lime Kiln on San Juan Island, their arrival to the area comes later than expected. Quayle initially planned to focus her research on the Southern Residents (who usually appear in May), but their delayed arrival led her to broaden the scope of her research. Throughout the month of June, the bulk of her data collection has come from frequent sightings of humpback whales including Heather and her calf.

Observing this humpback duo has been a particular highlight of Quayle’s fieldwork. She explains that the pair may be timing their movements with the tide and remarks how exciting it is see them and to learn “a bit of their personalities.” Since arriving, Quayle has only taken three days off from her observation point, and admits she spent those days trying to identify Heather.

Heather’s calf doesn’t have a name yet but is being referred to by Quayle as “C.” She suggests that a poll of Saturna residents might produce a good name for the calf. (Update: the calf has officially been named Neowise)

Another highlight of Quayle’s time on Saturna occurred five days ago when she spotted transient orcas swim right up to the cliff to catch a river otter. “They were not successful,” she says. “They had a calf with them… so perhaps they were kind of playing or practicing.” That night, Quayle looked through catalogues of fins to identify the whales. “You have to look at every single scratch they have… When they match—and it’s the same for the humpback whales—when you see a match, it just feels amazing.”

She makes up to 6 whale sightings each day and reports each of them to the Whale Report App, which alerts commercial vessels in the shipping channel of a whale’s presence.

In addition to observing the ways in which cetaceans use the area, Quayle is also gathering data on the movement of commercial and recreational vessels through Boundary Pass and along the Interim Sanctuary Zone. The three Sanctuary Zones, established by the federal government to help protect the endangered Southern Residents, are off limits to all commercial and recreational vessels. However, Quayle says she’s seen “quite a few boats” cutting the corners or going right through the Sanctuary Zone off East Point.

Five hundred meters offshore, a boat from the Department of Fisheries and Oceans flashes its lights and pulls over one such boat. It’s a recreational vessel that has just sped past the boundary and into the Sanctuary Zone. Quayle remarks that education around the rules and regulations of the zones is lacking. “Possibly they’re not aware,” she says. “Because unless you’re looking for information, you might not see it.”

Quayle emphasizes how stressful the underwater noise caused by vessels can be for whales and how important it is to give them their space and to limit that noise. When it comes to whale watching vessels, she recalls seeing a group of boats follow one humpback through Boundary Pass. About halfway across, two commercial vessels passed over the path of the whale and the whale watching vessels continued to follow it. Though these vessels were likely the required distance away from the whale, Quayle remarks that “it doesn’t feel good watching it.”

“There’s a lot of education out there that needs to happen,” she says. “And I think the locals are very concerned about that.” Quayle’s hope is that more people—and those on vessels in particular—become educated on the rules and regulations in the area, and on the importance of giving whales their space and quiet.

Asked how she felt about staying on Saturna Island, Quayle remarks that it’s “just such a beautiful place,” and she “can’t stop coming here.” The people who live on the island are “friendly and supportive” and create an amazing sense of community. First-time visitors might be surprised to see that everyone on Saturna Island waves ‘hello’ to each other. “I always feel bad when I forget to wave!” Quayle laughs.

On August 29th, Quayle will be speaking alongside her supervisor Dr. Ruth Joy at a Zoom Seatalk (Saturna Environmental Awareness Talk) hosted by SIMRES, where they will discuss some of the research going on in the area. See her SeaTalk here.

You can also follow along with Quayle via Instagram, where she posts some of the photos she takes on Saturna Island.

Thank you to ECHO | Enhancing Cetacean Habitat and Observation Program of the Port of Vancouver for their generous donation of camera equipment that is being used in this research. 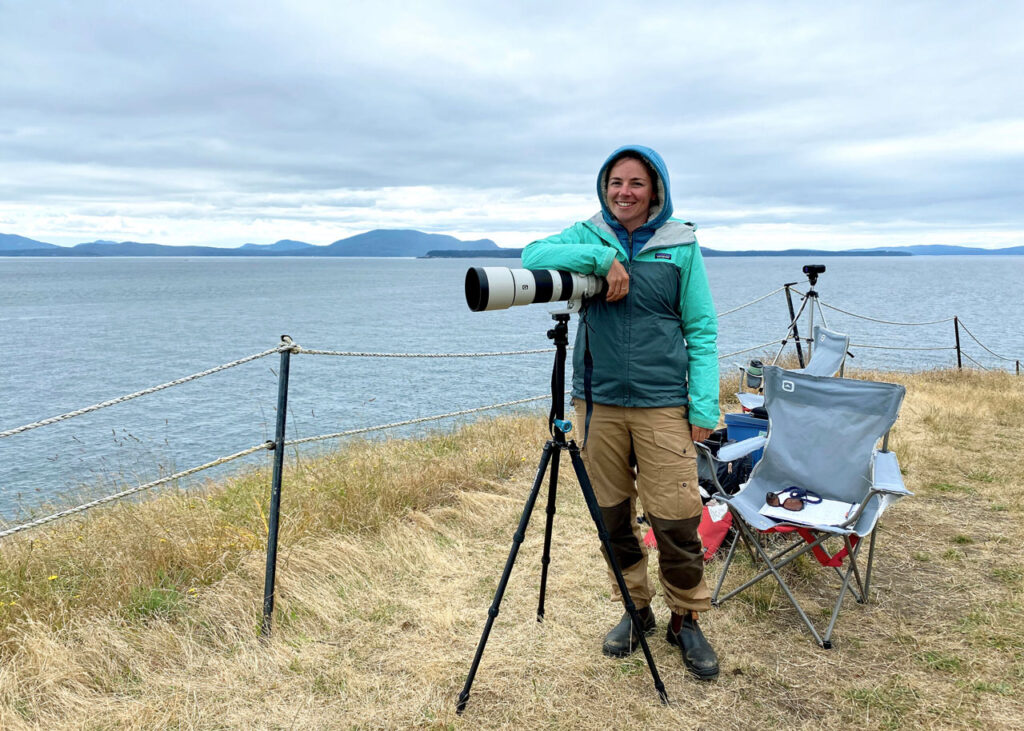 Quayle is completing her Master's in Ecological Restoration at Simon Fraser University and BCIT, under the supervision of Dr. Ruth Joy (SFU), Dr. Martin Wale (SIMRES), and Dr. Harald Yurk (Dept. of Fisheries and Oceans). She will be gathering data on Saturna Island until the end of August.

Note to the readers: On July 5, 2020, a humpback calf called Chip was hit by a Washington State ferry. Heather and her calf were not seen around Saturna after that. Happily, we received a report that they were seen near Galiano Island on July 15 and the calf has been reported as a male. The calf now has a name—he is Neowise.